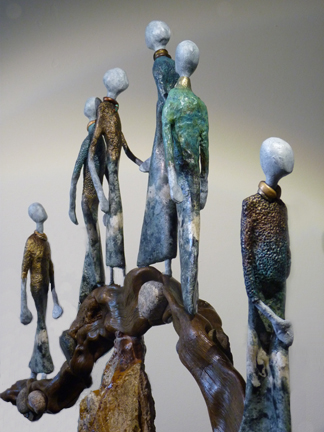 I have been working with this idea for about seven or eight months.  Although since the piece is closely related in form  to ‘Journey’ I suppose it’s been at the back of my mind for about two and a half years.  As with all my work the emphasis is on how we grow and move through life both individually and in relation to others and our surroundings.

The figures move across a bridge, each self sufficiently moving towards their own ends with neither reaction nor contact with the others.  But if the bridge is to remain in balance then they must all keep the same or similar positions.  The bridge is the journey, the figures remind us that as we follow the course of our life’s flow we must remain in balance with both the external and internal influences which might be brought to bear in any given situation and at any time.

The title is a simple translation, and probably an incorrect one, of the Tree of Life.  Crann meaning tree and Breatha, life.

With this piece I continue to investigate the Celtic belief in shape shifting.  That forms or beings by force of will are able to completely alter their appearance, so animals become plants, plants become people. etc..  Growing from sinuous fins suggestive of aquatic life but decorated to appear as stone, the figure develops through a winding plant stem to become a triple female figure and eventually to the branches of a tree.  Crann Breatha – Tree Of Life

My Wall Hangings are all of a type, they are all based on the Celtic tree of life mythology and my interpretation of it.  They generally have bark or tree root to form the torso of the figure and are usually weighted  using a found stone.  Some are more figurative than others but all follow my themes of  growth and regeneration.

Dance of Life, Sky Dance and Arabesque II are based on explorations of the Celtic festival of Beltaine and are intended to convey the joyfulness of life and the optimistic hopes of the season.

The reliance on the earth and the constant cycles of Mother Nature for survival meant that the advent of spring was the time which held great promise of new life and a fruitful and prosperous future for the Celts.  Pagan roots of Easter lie in celebrating the spring equinox, an important holiday in many religions for thousands of years.  Celebrating the beginning of spring may be among the oldest holidays in human culture.

The spring equinox, around the 21st of April, marks the end of winter and beginning of spring.  Both biologically and culturally, it represents   the end of a “dead” season and the rebirth of life, as well as the overriding importance of fertility and reproduction.  It is this exuberance and celebratory hope for the future that is imbued in these joyous pieces.