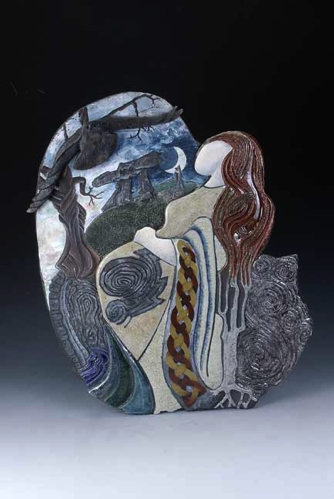 The Celtic peoples of ancient Europe relied on the earth and the constant cycles of Mother Nature for their survival. Any variation in the patterns of the seasons could prove disastrous. It comes as no surprise, then, that earth worship and fertility symbolism formed a large part of their religious beliefs. The female deities, or Mother Goddesses, as they have become known, are mainly associated with the female principles of creativity, birth, fertility, nurturing, and the cycles of growth. In the Earth Mother series I embody these abstracts in a succession of sculptures, using a variety of media to illustrate the ongoing pattern of birth, life, death, and rebirth.

She is both of the earth and from the earth, both creation and creator. In her is embodied the past, present, and the future, symbolizing the cyclical nature of life. Ancient images meld with the pregnant hope of new beginnings and all that the earth gives to support us on our journey. She is, and always will be, the genesis of the Earthʼs bounty.

The featured image above, Journey of the Ages, is a ceramic rendition of a drawing I completed in 2006 which has proved to be a rich source of inspiration for me.  Containing, as it does, representations of many of my thoughts and ideas displayed throughout my work. 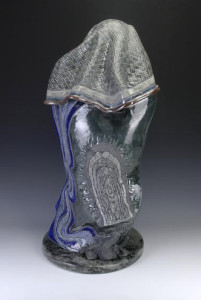 Earth Mother 1 was the first in an ongoing series of Earth Mothers. It is made of raku fired ceramic,  measures 23 x 11 x 9 inches and is mounted on a polished stone base.  As with all my raku pieces the glazes are hand painted with at least three and up to six layers to achieve the desired colour and surface quality.  She is growing from  rocks and is decorated with various symbols of life, birth and death.  Water, spirals, knot work and a neolithic birthing symbol.  The downward facing pose is a contrivance to give the appearance of a bud ready to bloom